I recently published a photo of this story on Facebook, and many stated they could not read it. It dates from Feb. 6, 1982. I found my daughter in November, 1981, and we had reunited with her parents' blessing at the Madison, Wisconsin airport within days, and I spent the weekend at their home. Here is the column as it appeared in the New York Times op-ed page the following February.
You couldn't pick them out of a crowd, but adopted people are different. Two traits set them apart: a vague sense of disconnection or dislocation, and difficulty forming a strong sense of self. The lack of a specific heritage, which tells them how and where they fit into the cycle of life, is thought to be the root of the problem. To be missing a past might not sound like much, but that's because the rest of us have always known where we came from. ''My Mom has really gotten interested in genealogy in the last few years,'' one 16-year-old adoptee wrote me, ''and it's fine for her, but it doesn't do anything for me.''


Adoptees also lack family medical records at a time when doctors place increasing emphasis on them. At least, I told myself, that was something I could give my daughter when I gave her up for adoption.

My social worker insisted that I fill out detailed medical histories on myself and her father, and I eagerly complied. Through the years, I volunteered to pass on additional information; responses to my letters always indicated that the agency's social workers had no further contact with the family after the adoption was made final. The letters said her family was delighted with her at the time of the adoption. The tone of the letters was friendly, conciliatory; I accepted their content on faith.

When I first became aware that the birth control pills I took during my first trimester of pregnancy might have harmed my daughter, placing her in a category of children similar to those whose mothers took the drug DES during pregnancy, I wrote again. The American Cancer Society and experts at the Memorial Sloan-Kettering Cancer Center with whom I spoke agreed that she should be examined regularly for gynecological abnormalities. I begged the adoption agency to pass this information on to her parents.

I wrote three letters in as many months before I received a reply. After seven more months, the director wrote and said that my daughter's doctor reported that she did not have the symptoms that I was concerned about. I was assured that her medical needs were being met. Yet when her parents and I met for the first time not long ago, we wondered on what grounds the director had made that statement, since Jane - that's my daughter's name -had never had a gynecological examination. They also wondered why their doctor's letter to the agency - written when Jane had her first outbreak of epilepsy at age 5 - never was answered. They were asking for the information I was volunteering to give. 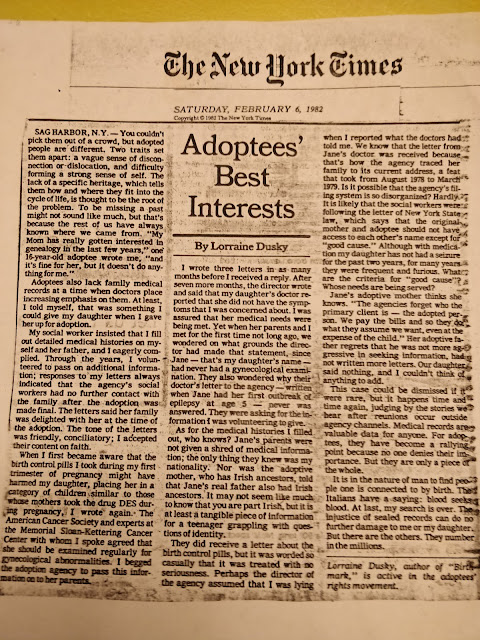 As for the medical histories I filled out, who knows? Jane's parents were not given a shred of medical information; the only thing they knew was my nationality. Nor was the adoptive mother, who has Irish ancestors, told that Jane's real father also had Irish ancestors. I t may not seem like much to know that you are part Irish, but it is at least a tangible piece of information for a teenager grappling with questions of identity.

They did receive a letter about the birth control pills, but it was worded so casually that it was treated with no seriousness. Perhaps the director of the agency assumed that I was lying when I reported what the doctors had told me. We know that the letter from Jane's doctor was received because that's how the agency traced her family to its current address, a feat that took from August 1978 to March 1979. Is it possible that the agency's filing system is so disorganized? Hardly. It is likely that the social workers were following the letter of New York State law, which says that the original mother and adoptee should not have access to each other's name except for ''good cause.'' Although with medication my daughter has not had a seizure for the past two years, for many years they were frequent and furious. What are the criteria for ''good cause''? Whose needs are being served?

Jane's adoptive mother thinks she knows. ''The agencies forget who the primary client is - the adopted person. We pay the bills and so they do what they assume we want, even at the expense of the child.'' Her adoptive father regrets that he was not more aggressive in seeking information, had not written more letters. Our daughter said nothing, and I couldn't think of anything to add.

This case could be dismissed if it were rare, but it happens time and time again, judging by the stories we hear after reunions occur outside agency channels. Medical records are valuable data for anyone. For adoptees, they have become a rallying point because no one denies their importance. But they are only a piece of the whole.

It is in the nature of man to find people one is connected to by birth. The Italians have a saying: blood seeks blood. At last, my search is over. The injustice of sealed records can do no further damage to me or my daughter. But there are the others. They number in the millions. --Lorraine Dusky, author of Birthmark, is active in the adoptees' rights movement.
Of course, since then, I have written hole in my heart, a memoir and report from the fault lines of adoption--second edition coming soon. Now on the last lap. Or penultimate lap.
Lorraine Dusky at 1:04 PM
Share

COMMENTS ARE MODERATED. Our blog, our decision whether to publish.

We DO NOT post comments that consist of nothing more than a link and the admonition to go there.